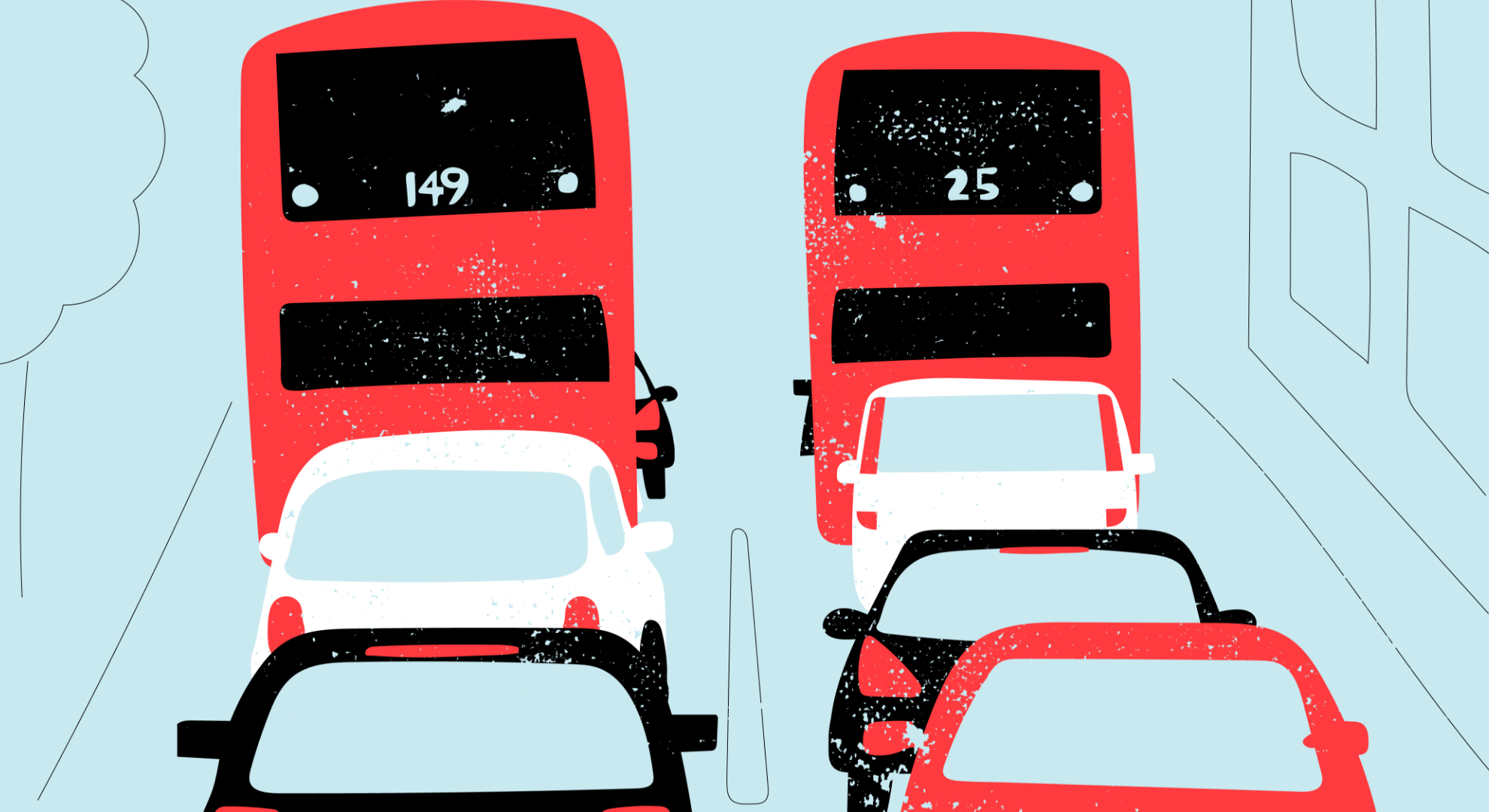 The team at Sterling insurance put their heads together to reveal Britain’s worst roads.

We love driving but on occasion we hate where we have to drive — here the team at Sterling Insurance put their heads together to identify some of Britain’s worst roads.

It’s not surprising that the country’s most congested roads are in London, with the A406 North Circular from Chiswick Roundabout to Hanger Lane regarded as the daddy of them all. On average, motorists spend two and a half days a year sitting here in nose-to-tail traffic.

As far as traffic jams are concerned London claims the top three of Britain’s worst roads while Leeds comes in at number four.

Traffic data firm Inrix has compiled a list of Britain’s top 10 worst roads for traffic. They are:

Congestion on Britain’s roads is bad, but it could be worse

Congestion costs our economy an estimated £8bn a year, but no UK city made the top 5 of most congested cities in the world. The Russian capital of Moscow took that dishonour, with drivers losing 210 hours a year sitting in traffic there.

Istanbul in Turkey, Bogota in Columbia, Mexico City and Sao Paulo in Brazil, completed the top 5, with London named the sixth most congested city in the world by Inrix.

More than 70 people are killed or seriously injured every day on our roads but which are Britain’s worst roads for accidents? The infamous Cat and Fiddle road — the A537 — crossing the Peak District National Park between Cheshire and Derbyshire takes that award.

This road is dangerous due to its sharp bends and steep falls from the carriageway, which is edged by dry-stone walls. Two-thirds of fatal and serious accidents on the Cat and Fiddle route involved motorcyclists.

Also notorious for having a high number of accidents and fatalities, many involving heavy goods vehicles, is the A43 between Towcester and Corby.

The A43’s single carriageway has a variety of speed limits that can leave drivers sitting behind trucks for long periods. As a result, many are tempted to overtake in dangerous places, which results in the high accident toll.

The top five list of Britain’s worst roads for accidents includes the A675 between Blackburn and Preston, the A54 between Buxton and Congleton and the A61 between Wakefield and Barnsley.

Driving in a straight line is, well, pretty straightforward. When you throw in roundabouts, traffic lights, converging lanes and junctions, things can get a little more interesting.

Here’s the Sterling list of worst roads for confusing junctions:

It’s not rocket science to work out that the convergence of two motorways and three busy dual carriageways at one junction is going to cause problems.

The first time you negotiate this junction it can be very confusing so don’t be surprised if you end up heading in the wrong direction.

It wasn’t meant to be a mess like this of course. Originally the two motorways were to have been extended taking traffic away from the junction but the road building project was ditched because money was tight.

It was built in 1972 so we’ve had almost half a century to get used to it. Have we got used to it? Of course not, so the Magic Roundabout qualifies as one of Britain’s worst roads for confusing junctions.

According to the experts the junction offers “multiple paths between feeder roads. The outer circle carries traffic in a clockwise direction, like a normal roundabout and less proficient users may choose to use only the outer circle. The inner circle carries traffic in an anticlockwise direction, and more proficient users may choose to use the alternative paths”. Got it?

The junction covers 30 acres, serves 18 routes and includes 2.5 miles of slip roads, but only half a mile of the M6 itself. Across 5 different levels, it has 559 concrete columns, reaching up to 80ft. Engineers also had to elevate 13.5 miles of motorway to accommodate two railway lines, three canals, and two rivers. No wonder it looks like spaghetti from the air.

On paper it’s a straightforward roundabout, but in reality the sheer volume of traffic that uses the junction makes it one of Britain’s worst roads.

At peak times it carries in excess of 10,000 vehicles an hour as the A40 Western Avenue (taking traffic to Heathrow and Oxford to the west and central London to the east) meets the A406 North Circular (carrying traffic towards the Ace Cafe, the M1 and Brent Cross shopping centre to the north west and Ealing, Acton and Brentford to the south).

For good measure, throw in the A4005 carrying local traffic to Alperton, Wembley and Harrow and you can see how confusion will quickly develop during the rush hour.

Just for a laugh it seems, Hanger Lane Underground Station is plonked bang in the middle of the gyratory.

Many a touring holiday has gone bad on Porlock Hill, one of Britain’s worst roads to drive up. The hill connects Somerset to Devon on a  precipitous scenic route with the Atlantic on one side and Exmoor on the other.

Porlock Hill climbs 725 feet in just under a mile and boasts the steepest gradient on any A-road in the UK. Signs warn of a 1 in 4 (25% gradient) climb. On the way up, the engine groans and on the way down the brakes puff smoke from overheating. Thank goodness there are several emergency escape roads in which to take sanctuary.

Hardknott Pass is a hill pass between Eskdale and the Duddon Valley in the Lake District. It is the joint steepest road in Britain with a maximum gradient of 1 in 3 (about 33%). It rises to a maximum of 1,289ft, and the Isle of Man 65 miles away in the Irish Sea can be seen on a clear day.

Originally used as a drovers’ route, Bealach na ba means “Pass of the cattle”. To be fair, it’s fit for cattle today and it’s one of the worst roads to negotiate. .

It’s a winding single track road through the mountains of Western Ross in the Scottish Highlands. Built in 1822 it’s reminiscent of roads through the great mountain passes of the Alps, with very tight hairpin bends that switch back and forth up the hillside and gradients that approach 20%.

It boasts the steepest ascent of any road climb in the UK, rising from sea level at Applecross to 2,054ft, and it is the third highest road in Scotland.

Nothing remains of the 100ft chimney that gave its name to this hill between Rosedale Abbey and Hutton-le-Hole in the North York Moors.

The average gradient is a moderate 13%, but in places that rises to 1 in 3, qualifying the route as one of Britain’s worst roads. .

Popular with hill cyclists and colloquially known as the “Chain Breaker” the road hosted the National Hill Climb Cycling Championship in 1987.

From 15 July 2019 until 8 April 2020, suburban Ffordd pen llech in Harlech, Snowdonia, was officially named the “World’s Steepest Street” by the Guinness Book of World Records, a title previously given to Baldwin Street in Dunedin, New Zealand.

On 8 April 2020 Guinness announced that Baldwin Street was reinstated as the world’s steepest street after determining that the best practice to calculate a street gradient is to take the measurement from the centreline.

The new measurements found the street in Dunedin had a gradient of 34.8% while Ffordd Pen Llech was calculated to be 28.6%. Although it lost out on the world title, Ffordd Pen Llech remains Britain’s steepest street.

Dodging potholes is a daily dilemma for many drivers, that’s despite a £2.5 billion pothole fund being set up by the Chancellor during his budget last year.

With potholes costing an average of £50 to fill, it’s anticipated up to 10 million potholes on thousands of roads will be repaired during the founding period, which runs until 2024.

But where will you find Britain’s worst roads for potholes? That dubious honour goes to the Mellor Brook Bypass in Balderstone, Lancashire, where the local authority received no less than 545 complaints about the deteriorating road surface in just 12 months.

The second most complained about route was Seven Hills Road in Elmbridge, Surrey, which received 216 complaints. This prompted residents to claim there were “more potholes than street lights”.

The top 10 worst roads for potholes

If you’re planning to tackle some of Britain’s worst roads this summer take care and remember it’s a good idea to take Sterling Insurance with you on your trip.

As well as some great deals on cover for your car, motorhome and caravan, you may find Sterling breakdown insurance is a great investment too when tackling the more challenging routes Britain has to offer.

Sterling breakdown cover costs from as little as £25.42 a year. We can arrange roadside recovery or a reliable home repair service wherever your car or van breaks down in the UK, Europe or further afield.

For motorists who need a breakdown service in an emergency, our instant cover provides immediate help — call  0344 381 9990 for details.

What will happen if I breakdown during the pandemic?